February 22, 2017 Fred Dumais
• Early evidence of efficacy of PBI-4050 as a monotherapy and in combination with one of the commercially available drugs confirmed
• PBI-4050 continues to be very well tolerated, whether used alone or in combination with nintedanib or pirfenidone
LAVAL, QUEBEC, CANADA, – February 22, 2017 – Prometic Life Sciences Inc. (TSX: PLI) (OTCQX: PFSCF)(“Prometic” or the “Corporation”) announced today positive results from its completed open label Phase 2 clinical trial in subjects suffering from idiopathic pulmonary fibrosis (“IPF”). In addition to demonstrating that PBI-4050 is safe and very well tolerated, an objective of this study was to seek early evidence of a clinical benefit with PBI-4050 treatment, whether administered alone or in addition to either of the drugs approved for the treatment of IPF, nintedanib or pirfenidone. These results confirm the preliminary results previously announced by Prometic on November 17, 2016, following the first 30 subjects’ completion of 12 weeks of treatment.
A total of 40 subjects were enrolled in the study conducted in 6 sites across Canada and all have completed the 12 weeks of treatment; 9 subjects received PBI-4050 alone, 16 received PBI-4050 & nintedanib and 15 received PBI-4050 & pirfenidone. The baseline characteristics of the subjects enrolled in this study were similar to those enrolled in prior IPF randomized controlled studies conducted by other pharmaceutical companies, namely ASCEND and INPULSIS.
As was demonstrated in these previously mentioned large clinical trials, IPF subjects typically experience a progressive decline in respiratory function. In contrast, in the ProMetic clinical study, the respiratory function of the subjects, measured as the forced vital capacity (FVC (ml)), remained stable after 12 weeks of treatment, in subjects treated with PBI-4050 alone and in those receiving PBI-4050 combined with one of the two approved drugs for the treatment of IPF (“Combi-1”) and was superior to that of those subjects treated with PBI-4050 combined with the other approved drug for the treatment of IPF (“Combi-2”).
“PBI-4050, either used alone or in Combi-1, demonstrated very promising early indications of efficacy, considering that current drugs approved for IPF only slow (but do not reverse) the decline in lung respiratory function”, commented Dr. John Moran, Chief Medical Officer of Prometic. “It is also important to note that during our clinical trial, there were no deaths nor did we see any subjects experiencing a decrease in FVC of 10% or more, contrary to the outcomes in the other IPF trials. There were no serious adverse events requiring PBI-4050’s discontinuation. The most frequent adverse event seen in all groups was diarrhea, but this was clearly much less significant in the subjects treated with PBI-4050 alone than in the groups receiving either of the currently approved drugs for the treatment of IPF, which are well-known for their significant side effect profiles”, added Dr. Moran.
Pierre Laurin, Prometic’s President and Chief Executive Officer commented: “These positive results support the rationale and clinical study design for the placebo controlled, pivotal Phase 2/3 IPF clinical trial we intend to initiate in Q2 2017. We expect to see PBI-4050, alone or in combination with one of the commercially approved IPF drugs, continue to outperform the current drugs in terms of efficacy, safety and tolerability”. 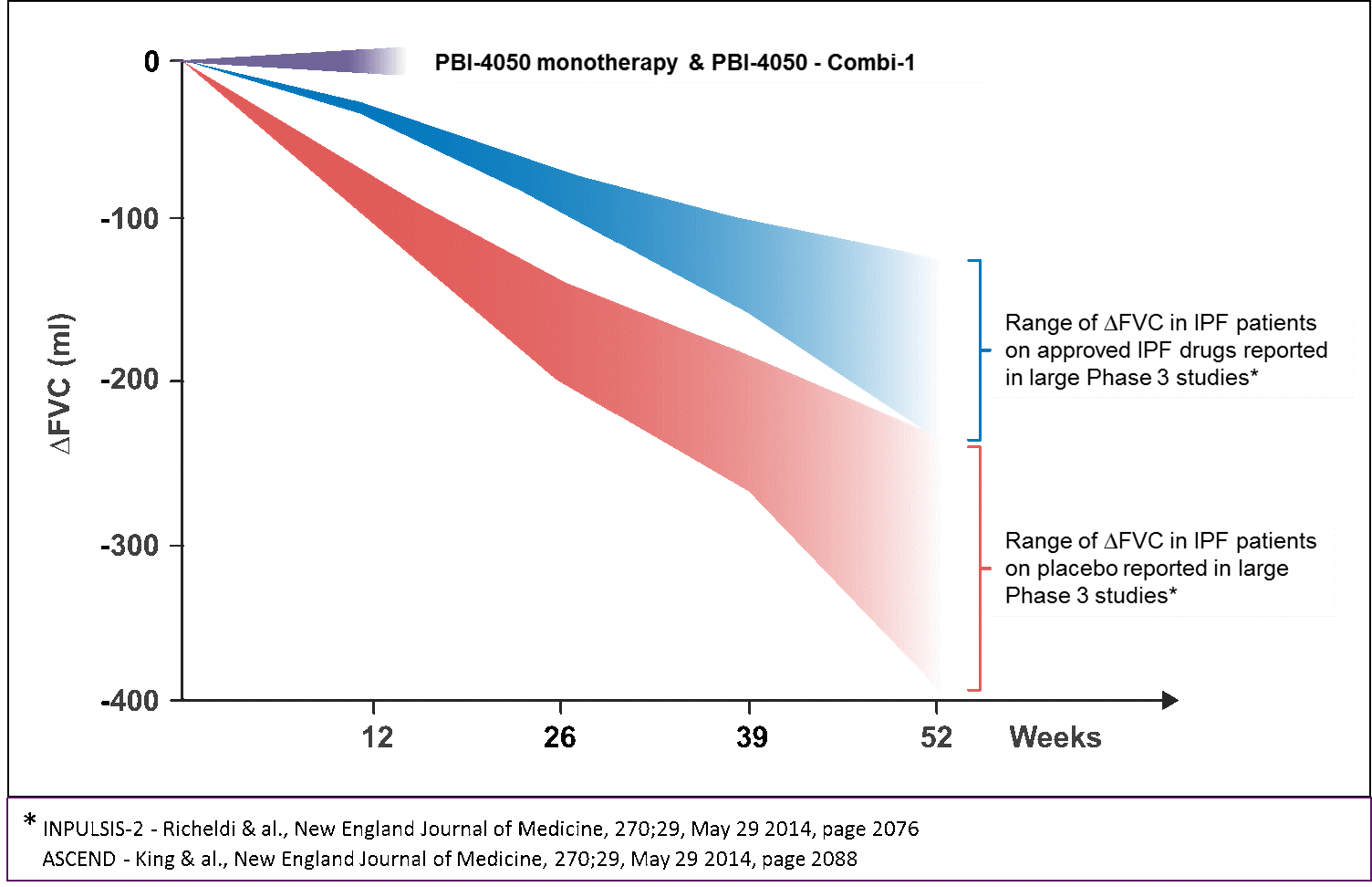 The comparisons shown herein between the results in this study and other larger phase 3 clinical studies are only made to provide some provisional guidance in terms of the potential clinical benefits of PBI-4050 for IPF patients.
Please note that the complete data set for Prometic’s open label Phase 2 clinical trial will be presented at an upcoming pertinent scientific conference, notice of which will be given by the Corporation.
About Idiopathic Pulmonary Fibrosis (“IPF”)
Idiopathic pulmonary fibrosis (IPF) is a chronic, devastating, and ultimately fatal disease characterized by a progressive decline in lung function. It is a specific type of interstitial lung disease in which the small air sacs of the lung, the “alveoli,” gradually become replaced by fibrotic (scar) tissue and is the cause of worsening dyspnea (shortness of breath). IPF is usually associated with a poor prognosis. The term ‘idiopathic’ is used because the cause of pulmonary fibrosis is still unknown. IPF usually occurs in adult individuals of between 50 and 70 years of age, particularly those with a history of cigarette smoking, and affects men more often than women. IPF affects about 130,000 people in the United States, with about 48,000 new cases diagnosed annually. Approximately 40,000 people die each year with IPF, a similar number of deaths to those due to breast cancer. The 5-year mortality rate for subjects with IPF is estimated to range from 50% to 70%.
About PBI-4050
PBI-4050 is an orally active lead drug candidate with excellent safety and efficacy profiles confirmed in several in vivo experiments targeting fibrosis. Fibrosis is a very complex process by which continuing inflammation causes vital organs to lose their function as normal tissue is replaced by fibrotic scar tissue. The proof of concept data generated to date confirms our lead drug candidates’ anti-fibrotic activity in several key organs including the kidneys, the heart, the lungs and the liver. Twenty six million subjects in the U.S. alone are believed to suffer from chronic kidney diseases (“CKD”). Subjects with severe CKD stages (3 and 4) suffer from a progressive loss of their renal function leading to end-stage renal disease and the need for dialysis or kidney transplant. Cardiovascular complications are the most common cause of death in dialysis subjects.
About ProMetic Life Sciences Inc.
Prometic Life Sciences Inc. (www.prometic.com) is a long established biopharmaceutical company with globally recognized expertise in bioseparations, plasma-derived therapeutics and small-molecule drug development. Prometic offers its state of the art technologies for large-scale purification of biologics, drug development, proteomics and the elimination of pathogens to a growing base of industry leaders and uses its own affinity technology that provides for highly efficient extraction and purification of therapeutic proteins from human plasma in order to develop best-in-class therapeutics and orphan drugs. Prometic is also active in developing its own novel small-molecule therapeutic products targeting unmet medical needs in the field of fibrosis, anemia, neutropenia, cancer and autoimmune diseases/inflammation as well as certain nephropathies. Headquartered in Laval (Canada), Prometic has R&D facilities in the UK, the U.S. and Canada, manufacturing facilities in the UK and commercial activities in the U.S., Canada, Europe, Russia, Asia and Australia.
Forward Looking Statements
This press release contains forward-looking statements about Prometic’s objectives, strategies and businesses that involve risks and uncertainties. These statements are “forward-looking” because they are based on our current expectations about the markets we operate in and on various estimates and assumptions. Actual events or results may differ materially from those anticipated in these forward-looking statements if known or unknown risks affect our business, or if our estimates or assumptions turn out to be inaccurate. Such risks and assumptions include, but are not limited to, Prometic’s ability to develop, manufacture, and successfully commercialize value-added pharmaceutical products, the availability of funds and resources to pursue R&D projects, the successful and timely completion of clinical studies, the ability of Prometic to take advantage of business opportunities in the pharmaceutical industry, uncertainties related to the regulatory process and general changes in economic conditions. You will find a more detailed assessment of the risks that could cause actual events or results to materially differ from our current expectations in Prometic’s Annual Information Form for the year ended December 31, 2015, under the heading “Risk and Uncertainties related to Prometic’s business”. As a result, we cannot guarantee that any forward-looking statement will materialize. We assume no obligation to update any forward-looking statement even if new information becomes available, as a result of future events or for any other reason, unless required by applicable securities laws and regulations. All amounts are in Canadian dollars unless indicated otherwise.

Orphan Drug Designation is granted to drugs or biologics that treat a rare disease or condition affecting f...

We are proud to have received a second PIM designation in the UK for PBI-4050, following the designation previously received for Alström syndrome.

Prometic announces the closing of its USD $80 million (CAD $100 million) line of credit with structured Alpha LP, an affiliate of Thomvest

As partial consideration for establishing the Credit Facility, Prometic has granted Structured Alpha LP an initial 10 million warrants with an exercise price of CAD $1.70 per common share.

Both our plasma-derived and small molecules lead clinical programs continue to progress as planned throughout advanced stages of the regulatory approval pathway.

Prometic announced that it will report its financial results for the third quarter ended September 30, 2017 on Monday November 13, 2017 after market close.

We are excited by the implications of our data and the promise of our candidates PBI-4050 and PBI-4547 for the treatment and prevention of liver diseases,

Positive results support requests for meetings with both FDA and EMA to define the clinical-regulatory pathway for approval of PBI-4050 for the treatment of Alström syndrome.

Our second quarter 2017 financial results are in line with our expectations and last few quarters. We have and will continue to concentrate our efforts and resources on lower-risk clinical programs.

Prometic today announced that it will report its financial results for the second quarter ended June 30, 2017 on Monday August 14, 2017 after market close.